Historical review. Persea mite (Fig. 1), Oligonychus perseae, was first described in 1975 from specimens collected from avocado foliage that were intercepted from Mexico at an El Paso, Texas quarantine facility. Persea mite is native to Mexico and damages avocados in arid regions, but it is not a major pest in the state of Michoacan where Hass avocado production is greatest. Persea mite has also been recorded from Costa Rica. Persea mite was first discovered attacking avocados in San Diego County in 1990, and was originally misidentified as Oligonychus peruvianus. By the summer of 1993, the pest had spread north to Ventura County. Santa Barbara had its first record in spring 1994, and in 1996 persea mite had established in San Luis Obispo County. There are no records of this pest in the San Joaquin Valley. Contaminated fruit bins, harvesting equipment, and clothing probably assisted in the dispersal of persea mite throughout California. High mite densities (>100-500 per leaf) and subsequent feeding can cause partial or total defoliation of trees. Mite-induced defoliation opens the tree canopy, increasing the risk of sunburn to young fruit and exposed tree trunks. Premature fruit drop can occur.

Pest identification. An important step in any pest management program is the accurate identification of the pest. This is particularly true for biological control because natural enemies are often specific to just one pest or group of pests (e.g., spider mites). Persea mites feed in colonies beneath protective webbing (i.e., nests) along midribs and veins on the undersides of leaves, and feeding damage produces characteristic circular necrotic spots. Avocado brown mite, Oligonychus punicae, feeds on upper leaf surfaces and, when populations are high, mites will feed on the undersides of leaves. Feeding damage by avocado brown mite results in bronzing of upper leaf surfaces. Six-spotted mite, Eotetranychus sexmaculatus, is very similar in appearance to persea mite and it also feeds on undersides of leaves. Six-spotted mites prefer to feed adjacent to the midrib and large lateral veins. Feeding damage is different from that caused by persea mite in that six-spotted mites do not produce circular feeding colonies covered with dense webbing and necrotic spotting is purplish and irregular in appearance. All three pest mites damage leaves by removing chlorophyll during feeding.

Biology of the persea mite. Persea mite has five developmental stages (egg, larva, protonymph, deutonymph, and adult). All lifestages are predominantly found in nests where feeding, mating, reproduction, and development occurs. Sex ratio is generally two females to one male. A generalized life cycle for persea mite is shown in Diagram A, and Table 1 summarizes important aspects of persea mite biology. 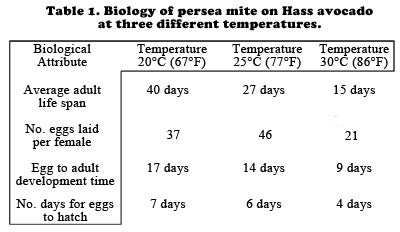 Predator mites feeding on persea mite inside nests can be estimated from half second vein counts in a similar fashion. The correlation factor for predators on randomly selected leaves is six.

Persea mite densities can also be estimated by visually assessing damage levels on infested leaves. The use of photographs with known levels of damage, mite densities responsible for observed levels of damage, and the number of necrotic spots resulting from mite feeding can be used in treatment decision-making. Colored photographs of avocado leaves showing 1%-50% feeding damage and the numbers of persea mites required to cause recorded amounts of damage are shown in Diagram C.

Pest control advisors can be hired or orchard workers can be trained to monitor numbers of persea mites and predators using this sampling method.

Photographs of avocado leaves damaged by persea mite feeding can be used to assist with decisions regarding control measures. Measurements of persea mite feeding damage to leaves that have fallen from avocado trees to the ground indicates that average feeding damage to the leaf surface of fallen leaves is 15-22%. However, 86-90% of fallen leaves have damage equal to or greater than 7.5-10%. From these data it appears that the probability of leaf drop increases greatly once 7.5-10% of the leaf surface is damaged by persea mite feeding and control measures may need to be implemented before this 7.5-10% level of damage is observed. There are no experimental data to verify the effectiveness of using these damage estimates as treatment thresholds.

Cultivar susceptibility. Avocado cultivars vary in their susceptibility to persea mite feeding damage. By calculating the average percentage of leaf area damaged by mite feeding, cultivars can be ranked from least susceptible to most susceptible. When cultivars are ordered in this manner the following ranking is attained: Fuerte (average leaf area damaged by feeding persea mites is 13.3%), Lamb Hass (16.9%) = Reed (16.9%) < Esther (29.7%) < Pinkerton (30.2%) < Gwen (37.4%) < Hass (38.4%). The mechanism by which Fuerte and Lamb Hass reduce feeding damage is unknown. Host plant resistance may be due to leaf chemistry which reduces mite survivorship or lowers reproduction rates, leaf hairs that favor natural enemy activity, or some form of repellancy that causes mites to abandon the tree to search for more suitable host plants. Increasing cultivar diversity in orchards should be considered as a strategy to reduce damage and associated yield reductions from persea mite.

There are several species of predators that occur naturally in California avocado orchards which have been observed to feed on persea mites. None of these natural enemies provide effective control of persea mite. However, their presence in orchards is desirable because generalist predators probably lessen the severity of persea mite infestations and will feed on other pest species.

Euseius hibisci (Acari: Phytoseiidae). (Fig. 3) This predatory mite is extremely common in avocado orchards and is considered an important generalist predator. Euseius hibisci can build to high densities in the absence of mite prey and can successfully survive and reproduce on a diet of pollen (this predator can reproduce on as little as 6.6 avocado pollen grains per square inch of leaf), aphid honeydew, mildew, lantania scale crawlers (Hemiberlesa lataniae), and leaf exudates. Euseius hibisci can become entangled in spider mite webbing and, in some instances, webbing may have a repellant effect. Euseius hibisci is too large to invade persea mite nests but will feed on mites wandering outside of nests. In the presence of pollen, consumption of spider mites by E. hibisci is reduced by 26%, but this reduction is offset by a 63% increase in reproduction when compared to a diet of mites alone. Aspects of E. hibisci's biology are summarized in Table 2. 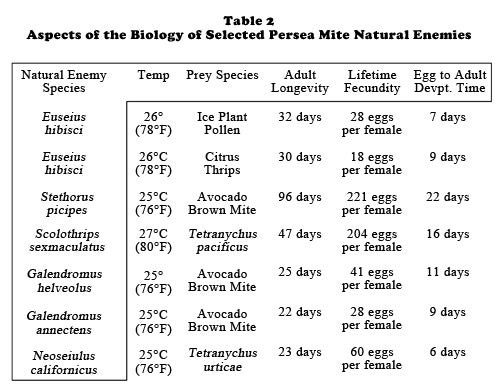 Stethorus picipes (Coleoptera: Coccinellidae). This predator is very important in controlling outbreaks of avocado brown mite. Stethorus is able to suppress avocado brown mite outbreaks because adults quickly find brown mite populations, exhibit high prey preference for spider mites, and reproduce quickly on a diet of spider mites. Reproduction by Stethorus slows when day lengths are less than 10 hours, as this indicates the onset of winter. Releases of Stethorus into avocado orchards have been shown to control brown mite outbreaks, but this approach was economically unfeasible. This predator does not appear to provide suppression of persea mite outbreaks. Aspects of the biology of S. picipes are summarized in Table 2.

Scolothrips sexmaculatus (Thysanoptera: Thripidae). (Fig. 4) Six-spotted thrips, Scolothrips sexmaculatus, is a specialized predator of spider mites. In some instances, this predator has been responsible for causing substantial reduction of spider mite populations on peaches, cotton, strawberries, and rhubarb. This predator is commonly found feeding within persea mite nests in late summer and predation by six-spotted thrips may hasten the decline of persea mite populations. Aspects of six-spotted thrips biology are summarized in Table 2.

Several species of predacious mites are commercially available in California. Species that have been studied in field trials for persea mite are discussed below.

Galendromus helveolus (Acari: Phytoseiidae). (Fig. 5) This predator is a specialist spider mite predator that plays a significant role in mite suppression in subtropical fruit crops in Florida. Galendromus helveolus was introduced into California from Florida and is found throughout Texas, Mexico and Central America. The sex ratio of this species is strongly biased toward females. This predator will feed on all stages of spider mites but prefers eggs and protonymphs, and in the absence of food, females will feed on their own eggs. Galendromus helveolus has been released in California for control of avocado brown mite and six-spotted mite, and recovery attempts suggest that this predator does not persist naturally at high densities in avocado orchards. Releases of this natural enemy onto avocado trees indicate that it is an effective persea mite predator because it has the ability to enter nests to feed and reproduce. Aspects of the biology of G. helveolus are presented in Table 2.

Galendromus annectens (Acari: Phytoseiidae). (Fig. 6) This predator has a widespread distribution from North America through Latin America and into South America. This mite has been found in coastal California avocado orchards but is very rare. Galendromus annectens is among the smallest known phytoseiids and this probably allows it to reproduce on low quantities of food and hide in places inaccessible to larger predators. Studies indicate that this predator is not closely associated with dense web-producing spider mites that have clumped distributions, and it does not show a strong tendency to remain in spider mite nests. Field observations suggest G. annectens may be a predator of fungi-eating tarsonemid mites. Aspects of the biology of G. annectens are presented in Table 2.

Based on the results of field trials, the commercially available phytoseiids with the most potential for controlling persea mite are G. helveolus and N. californicus. Work is currently in progress refining release rates and timings of these predators. More research is required before recommendations for use of these predators can be made. However, some practical guidelines for using phytoseiids in avocado orchards in southern California are:

In some instances persea mite infestations will be severe enough to warrant chemically-based control to reduce damage to leaves and the possibility of defoliation. Field trials evaluating the efficacy of miticides in Ventura County indicate that water, Agri-Mek (this miticide is not registered for use on avocados), and NR 435 oil were the most effective compounds tested for control of persea mite. These treatments reduced persea mite numbers by 75%. However, a corresponding decrease in natural enemy numbers may also be observed. Pesticide evaluation studies are continuing. Water applied to trees with a hand gun at 150-200 psi, physically disrupted persea mite nests and exposure because of nest damage may increase this pest's vulnerability to natural enemies or adverse environmental conditions (e.g., increased risk of desiccation).

Frequent use of a limited number of pesticides with similar modes of action (e.g., nerve poisons) can result in the development of resistance. Pesticide resistance is the developed ability of a pest population to withstand pesticides that were formerly effective. The rate at which resistance develops in a population is related to the intensity of pesticide use. To prolong pesticide efficacy for persea mite, it is advisable to limit the frequency of applications by spraying only when necessary, to alternate between miticides with different modes of action, and to leave areas of the orchard untreated (this will conserve natural enemies and allow survival of susceptible persea mites that can breed with mites with resistance genes thereby reducing the rate at which resistance develops). Decisions to spray should be based on population monitoring results of both persea mites and natural enemies and consultation with a PCA may be warranted before applying pesticides for persea mite control.

For further information on biological control and research on persea mite contact:

A free factsheet on the biology and managment of the persea mite is available from the California Avocado Commission by calling 949-341-1955 or by requesting it directly on their website.