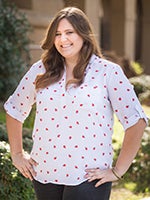 Kelsey Schall is a fourth year Ph.D. candidate in the Entomology Department at the University of California, Riverside. In 2009 she graduated from the University of California, Santa Barbara as a Regent’s Scholar with a B.A. in Biology from the College of Creative Studies. Her interest in insects started with a high-school entomology course and matured throughout her undergraduate studies. As a student researcher at UCSB she became fascinated by parasitic interactions, first studying them in marine life, and later through an independent insect biodiversity survey at the Carpinteria Salt Marsh Reserve. Her vocational interest in parasitology and entomology made biological control a natural fit for a graduate-level program.

Following acceptance into the Entomology Ph.D. program at the University of California, Riverside in 2013, Kelsey began her research on biocontrol of ant-tended honeydew-producing insects infesting California’s iconic citrus crop. The most significant of these pests, the Asian citrus psyllid (ACP), Diaphorina citri, in combination with its vectored disease, huanglongbing (caused by the CLas bacterium) poses an unprecedented threat to the state’s $3-billion-a-year citrus industry. A comprehensive approach aimed at sustainable integrated pest management of ACP is necessary to curtail disease spread through citrus production areas.

In pursuit of this goal, Kelsey’s research investigates both the antagonistic one-on-one interactions between invasive ants and key parasitoids (e.g., Tamarixia radiata) and the community-wide, long-term impacts (e.g., pest infestation, parasitism, and beneficial insect abundance and biodiversity) of invasive ants in citrus. Biocontrol-augmenting ant suppression is achieved through the use of low-toxicity, liquid baits. The main target is the Argentine ant, Linepithema humile, the most ubiquitous and problematic tramp ant found in Southern California.

Kelsey's current research focuses on the development and evaluation of novel technological tools to improve and streamline the process of controlling honeydew-producing hemipteran pests and the ants that tend them in commercial agriculture. In recent work Kelsey completed full-scale field tests of a highly-effective, low-toxicity, biodegradable hydrogel baiting system for control of L. humile. She is currently collaborating with scientists from UCR's Department of Engineering and Computer Sciences to develop and test an infrared sensor and phone-based application for autonomous monitoring of pest ants in citrus.

Products and strategies derived from this research could be reappropriated for other valuable cropping systems that suffer greatly from ant-tended pests (i.e., wine grapes and tree nuts), considerably improving biological control across California and upholding its historical precedent of strongly successful IPM programs.

In addition to being a nuisance in urban settings, the Argentine ant is problematic in both natural and agricultural ecosystems. Argentine ants are also an economic threat because of their potential to tend plant pest insects, such as mealybugs, scales, and aphids...

Asian citrus psyllid is an efficient vector of the citrus disease huanglongbing (HLB), previously called citrus greening disease, which is one of the most destructive diseases of citrus worldwide. In North America, the psyllid vector...

Brown Soft Scale feeds heavily on its host plant which reduces the trees ability to remain healthy. The Brown Soft Scale kills twigs and will reduce fruit yield. The insect secrets honeydew which attracts ants that will interfere with biological control efforts.

Citrus mealybug is a common problem in greenhouses. It produces copious amounts of honeydew that causes sooty mold damage. High densities of the insect lead to decreased plant vigor, defoliation, and the insects themselves may be contaminants of grape clusters...