The red-banded whitefly, Tetraleurodes perseae Nakahara (Nakahara, 1995), was first discovered in San Diego in 1982 (Rose & Wolley, 1984a, 1984b) and was described in 1995. This whitefly is probably native to Latin America and specimens are known from the Caribbean, Central America, Florida, and Mexico (Nakahara, 1995). The current distribution of red-banded whitefly in California avocado orchards ranges from San Luis Obispo County in the north to San Diego County in the south. Tetraleurodes perseae can increase to very high densities over the Fall-Spring period when plants are producing succulent young leaves, which are ideal for feeding and oviposition by adults. Although a minor pest, honeydew production can promote the growth of black sooty mold on leaves and feeding by adult whiteflies can deform immature leaves. Attaining effective biological control of Tetraleurodes perseae is critical if this pest is to be constrained at densities which do not cause economic damage. California avocados are renowned for low insecticide usage and growers rely on natural enemies to control many potential pest species. Red-banded whiteflies are under very good control in Mexico by two Encarsia spp. and one Eretmocerus sp. of parasitoid (both Hymenoptera: Aphelinidae). In California, these Mexican parasitoids are absent, but Cales noacki Howard, a parasitoid released for woolly whitefly (Aleurothrixus floccosus [Maskell]) control can parasitize up to 92% of red-banded whitefly nymphs in some coastal areas (Rose & Woolley, 1984a, 1984b). However, this level of control is not consistent in all areas and Tetraleurodes perseae appears to be less effectively controlled by C. noacki in more interior avocado growing areas where temperatures are hotter. 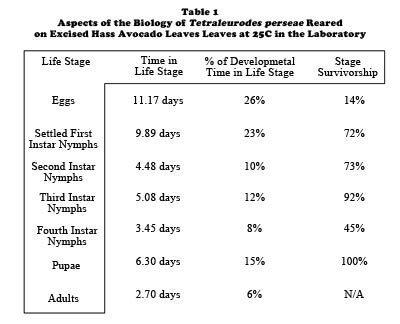 Whiteflies are small sucking insects that live on the underside of leaves. Adult female red-banded whiteflies lay kidney bean shaped eggs on undersides of leaves. Upon hatching, the beige colored first instar nymph (often referred to as a crawler) walks a short distance from the egg and settles and commences feeding. All of the subsequent immature whitefly stages (instars two through four and the pupal stage) are sessile and do not move from the original feeding site selected by the crawler. As whitefly nymphs mature, they shed their cuticles before moving onto the next developmental stage. During the course of development the old cuticles that have been shed are often collected on the top of the whitefly nymph. This makes aging red-banded whitefly nymphs very easy as the shed skins on top of nymphs can be counted to determine current age. Mature third instar nymphs, fourth instars, and pupae are black in color. Pupae are easily distinguished from fourth instar nymphs by having elevated body margins and a dense white wax fringe that curls upwards. Adult whiteflies that emerge from pupae are winged and disperse either by flying or walking. The unofficial common name for Tetraleaurodes perseae, red-banded whitefly, is attributable to the rusty red bands on the wings of adults. Very little is known about the developmental and reproductive biology of red-banded whitefly or its phenology in California avocado orchards. Aspects of the developmental biology of red-banded whitefly that have been determined in the laboratory are shown in Table 1.

In the U.S.A., T. perseae has only been recorded from avocados in California. This whitefly appears to have a highly restricted host plant range, being found on only members of the Lauraceae, in particular, species in the genus Persea (Nakahara, 1995). Other host plants in addition to avocado that may support populations of T. perseae in California have not been identified. Whiteflies are efficient vectors of viral diseases. Presently, T. perseae does not appear to be involved in the transmission of disease probably because of a lack of viruses infecting avocados in California. Increasing movement of avocado plants and fruit between California and Central America through both legal and illegal channels increases the likelihood of new viral diseases establishing in California. If new avocado viral diseases do establish, T. perseae maybe an efficient and widespread disease vector. Substantially more laboratory and fieldwork is needed to improve our understanding of how T. perseae and its natural enemies function in California avocado orchards.

For further information on biological control and research on persea mite contact:

Acknowledgments. Photographs used in this factsheet were taken by Mr. Jack Kelly Clark (UC Photographer). Preparation of this web page was supported in part by the California Avocado Commission as was funding to G. Soliman to conduct the laboratory work presented here.