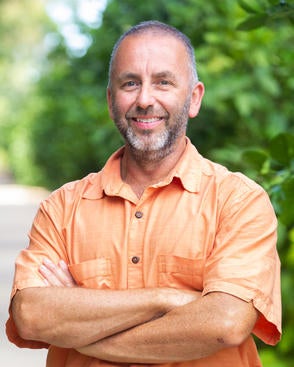 Dr. Hoddle has headed the research in this laboratory since 1997 and is primarily involved in the identification of pest problems where biological control could be a successful approach. The location, release and evaluation of natural enemy impacts on population growth features strongly in his research. The evaluation of biological control agents are conducted primarily in the field and, when necessary, aspects of both pest and natural enemy biology and behavior are studied in the laboratory.  He is also the director of the Center for Invasive Species Research.

Avocado lace bugs were first detected in California on backyard avocado trees in the Chula Vista and National City areas south of the City of San Diego in September 2004. For more than a decade, ALB populations in California were restricted to backyard avocado trees in residential areas of San Diego County, and as such, was not considered a major threat to commercial production. DNA analyses suggested that these populations likely originated from the state of Nayarit in Mexico (Rugman-Jones et al. 2012).

In October 2017, well established, reproducing populations of ALB were confirmed as the agents responsible for significant leaf damage in several commercial Hass avocado groves in Oceanside and De Luz, San Diego County, and Temecula, Riverside County. Around the same time similar damage was observed on backyard avocados in Culver City, LA County. DNA analyses by the Stouthamer Lab at UC Riverside suggest that these populations differed from the original founding populations that were detected in 2004 in SD County. These more “aggressive” lace bugs may have originated from Florida, the Caribbean, French Guyana, or the Yucatan peninsula in Mexico (see below for more on Genotyping and DNA Analyses). Consequently, Florida seems to be the most obvious source because its part of the contiguous United States. However, confirming Florida as the area of origin of the “aggressive” strain will require thorough sampling of avocado lace bug populations throughout potential source areas (i.e. the Caribbean, French Guyana, and the Yucatan peninsula).

Adult avocado lace bugs are small winged insects about 2 mm in length (slightly longer than 1/16 inch [Fig. 1A]) with black bodies, yellow legs and antennae, and are visible to the naked eye (Fig. 1B). The insects live in colonies on the lower surfaces of leaves, often with adults, eggs and nymphs being found together (Fig. 1C).

Eggs are laid in an irregular pattern, sometimes in loose rows, stuck to the lower leaf surface and are covered with irregular globules of a black, sticky tar-like substance excreted by adults (Fig. 2A). These sticky exudates may protect eggs from attack by natural enemies. To the naked eye, eggs will appear like grains of black pepper. The eggs hatch into a wingless feeding stage called nymphs and hatched eggs are identifiable by open opercula (Fig. 2B). The nymphs go through gradual metamorphosis shedding their exoskeleton several times as they grow in size, finally developing wings and becoming flying adults. The nymphs are dark red-brown to black and covered with spines (Fig 2C). They feed for approximately two to three weeks before maturing into winged adults, which lay eggs, restarting the life cycle.

In San Diego California, nymph and adult lace bug populations begin to build in June, peak in September-October, before declining in November-December to low levels in January-February (Humeres et al. 2009a). In Florida, avocado lace bug outbreaks typically occur from October through March and decline sharply over April through August. These observed population trends in Florida are thought to be strongly influenced by the development of the leaf canopy following bloom.

Lace bugs restrict their feeding to the undersides of leaves, inserting their needle-like mouthparts into leaf tissue cells to extract cell contents. Feeding initially causes small white or yellow spots on the surface of the leaves as individual cells dry out (Fig. 3A). It is suspected that feeding damage can provide entrance for pathogenic fungi, in particular Colletotrichum spp., which are leaf anthracnose fungi. As lace bug colonies grow, brown necrotic (dead) areas develop where there has been heavy feeding damage. These necrotic areas look like tip-burn caused by salt damage, but in this case, the necrotic areas are islands of dead tissue in the interior of the leaf surrounded by living tissue (Fig. 3B). Heavy feeding can cause striking leaf discoloration and early leaf drop (Fig. 3C). Other signs of lace bugs are dark, varnish-like excrement and shed white nymphal skins on the undersides of leaves. Avocado lace bug nymphs and adults do not feed on fruit, but will likely have a detrimental effect on yield resulting from the loss of photosynthetic capacity in damaged leaves. Avocado lace bug has become an increasingly important economic problem in Florida and the Caribbean, with severe infestations causing defoliation and potentially reduced yields.

Avocado lace bugs have only been reported feeding on avocado, red bay, and camphor, which are all members of the plant family Lauraceae. Experimental evidence from Florida indicates that avocado varieties vary in their susceptibility to feeding damage. West Indian x Guatemalan avocado hybrids appear to be particularly resistant to attack in Florida. Observations in the Dominican Republic indicate that Hass avocados (a Mexican-Guatemalan hybrid) can be severely damaged by lace bug outbreaks. Similarly, in California, avocado lace bug will attack Hass growing in commercial orchards, and Bacon is a very good host for laboratory colonies of this pest (Humeres et al. 2009b).

The most important biological agents reported in Florida are two egg parasitoids including Oligosita sp. (a trichogrammatid) and Erythmelus klopomor (a mymarid) (Peña et al 2009). Egg parasitoids lay their eggs inside the egg of the lace bug. The parasitoid larva that hatches from an egg feeds on the internal contents of the lace bug egg, killing it. Predators that attack nymphs and adults include, mirids, larvae of cecidomyiid flies and green lacewings (Fig. 4) (Gagne et al 2008; Holguin et al. 2009; Humeres et al. 2009b). A predatory thrips, Franklinothrips vespiformis, has been observed in high numbers feeding on avocado lace bugs on Hass avocados in the Dominican Republic and Guatemala (Hoddle pers. observation). The natural enemies attacking avocado lace bug in California likely include green lacewings and predatory thrips. In Florida, Mycotrol, an insect-killing fungus (Beauveria bassiana), provided some control of avocado lace bug (Peña et al. 1998). However, conditions are much more humid in Florida than California, and historically insect-killing fungi have not been effective at controlling pest insects in arid environments.

Pesticides used for sucking insect control may be effective for avocado lace and some insecticides with potential for lace bug control may also have some compatibility with natural enemies (Humeres et al. 2009b; Byrne et al. 2010). Researchers at the University of Florida have shown that citrus oil, and M-Pede (an insecticidal soap) provided short-term lace bug control. Results of small tree trials or weathered residue tests have indicated that carbaryl, imidicloprid, cyfluthrin, carbaryl, fenpropathrin, and malathion provide excellent control of avocado lace bug nymphs. Spinosad, abamectin, and mineral oil are much less effective at providing control. 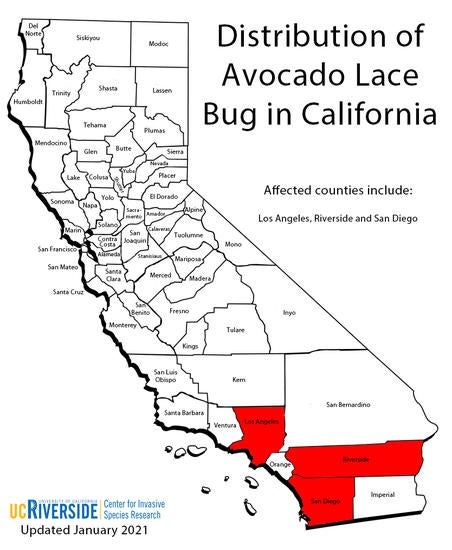 To determine the potential area of origin of the original lace bug invasion into San Diego in 2004, extensive foreign exploration in Mexico and the Caribbean resulted in the collection of avocado lace bugs from widely separated areas, coupled with material shipped from cooperators in Florida, Texas, and French Guyana was used for genetic population profiling (Rugman-Jones et al. 2012). The results from DNA-based analyses revealed evidence of very strong population structure among sampled lace bug populations. This result indicated that the different potential source populations were very distinct. This resulted in the identification of the Mexican state of Nayarit as the most likely origin of the invasive populations that established in San Diego (Rugman-Jones et al. 2012).

Curiously, for about 13 years, lace bug populations in California were restricted to backyard avocado trees in residential areas of San Diego County and this potentially damaging pest was not considered a major threat to commercial production. However, in October 2017, well established, reproducing populations of lace bugs were confirmed in commercial Hass avocado groves in both Oceanside and De Luz, San Diego County and Temecula in Riverside County (CAC, 2017). Around this time infestations were reported from Culver City in Los Angeles County. This raises the question of whether the infestation in commercial groves is from the same population that was previously known in southern San Diego County from 2004, or is the result of a new and previously unknown introduction. To resolve this issue, Paul Rugman-Jones (Stouthamer Lab, Dept. of Entomology, UC Riverside) performed genetic analyses similar to those that were used originally to genetically profile the lace bug population discovered in San Diego in 2004 (see Rugman-Jones et al. 2012 for details).

These molecular analyzes were used to profile lace bug populations infesting commercial groves in Bonsall, Oceanside, and Temecula. Analysis of CO1 sequence data for 60 lace bugs resulted in the identification of two genetic variants. Of these 60 data points, 18, all from the Oceanside population, matched the population originally analyzed from San Diego. The remaining 42 specimens matched DNA from populations previously sampled from Florida, the Caribbean, French Guyana, and the Yucatan Peninsula. This finding strongly suggests that California has experienced a second lace bug invasion. However, given the limitations of the current analysis the exact area of origin for this second invasion cannot be determined, but Florida may be a good parsimonious guess.

More information on avocado lace bug can be found on the web at: