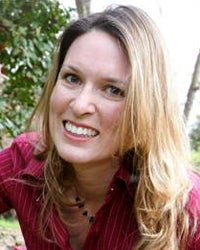 Elizabeth (Betsy) Boyd investigated the risk posed to the native smoke-tree, blue-green, and green sharpshooters in Southern California habitats via the introduction and establishment of the exotic Mymarid parasitoids (Gonatocerus spp.) released for control of the glassy-winged sharpshooter, Homalodisca vitripennis (Germar). Additionally, she classified the native parasitoid fauna of these indigenous sharpshooters and developed novel methods for host specificity testing of insects used in biological control of arthropods. Dr. Boyd graduated with her Ph.D. in June 2007. She now has a faculty position at California State University, Chico.

Dr. Boyd was raised in the thick, rich, and diverse forest foothills of the Cascade Mountains where she grew to love nature and developed an appreciation for hard work. Her love of the wilderness was nurtured through the influence and guidance of her grandparents, who would take her on various adventures including beach tide pools, camping trips, farm visits, gardens and nature hikes. They opened her eyes to the vast diversity and biology of many animals, plants and insects. Her parents furthered her enthusiasm for the outdoors by allowing her adopt numerous pets, care for her own flower garden, and by taking her on various fishing and camping excursions. Betsy knew that she would some day be a biologist.

In efforts to pursue her passion, Dr. Boyd completed her Associates Degree at Skagit Valley College in 1997 while working 60 hour weeks via three part-time jobs. She took six months off to raise money for tuition fees, and later completed a Bachelor of Science Degree in Entomology, with an emphasis on integrated pest management of weeds, at Washington State University (WSU) in 2000. During these three years, she assisted a research project in the Crops and Soil Science Department as a work study student investigating the effects of different tillage strategies on the prevalence of soil microbes and their effect on wild oat, jointed goatgrass and downy brome in wheat fields. She also was employed as a summer intern in a biological control company, held office as an elected member of the College of Agriculture and Home Economics Student Senate, was an avid member of the Horticulture Club, volunteered at the Pullman animal shelter, earned various awards and scholarships for academic merit, and graduated as outstanding senior in Entomology.

Upon completion of her Bachelor's Degree, Betsy was offered a graduate student position with a fully funded research project in biological control. Her thesis involved an intensive life history and impact assessment study of the purple loosestrife (Lythrum salicaria) flower feeding weevil, Nanophyes marmoratus Goeze. During her summers as a graduate student, she continued to work with the biological control company where she had previously interned. Here, she was able to assist in the redistribution of one fungal and thousands of insect natural enemies of various noxious and common weeds across the tri-state area. These biological control agents were shipped for suppression of yellow star thistle, spotted and diffuse knapweed, moth and common mullein, purple loosestrife, yellow and Dalmatian toadflax, Canada thistle, poison hemlock, and rush skeletonweed. The coursework she completed strengthened her botanical and entomological knowledgebase and she now has rather large plant and insect collections. Betsy completed her Master's Degree in Entomology, with emphasis on biological control of weeds, at WSU in 2002 and became a member of the Phi Kappa Phi Honor Society for maintaining a perfect grade point average.

Though still a Cougar through and through, Dr. Boyd moved to Riverside, CA to join one of the best entomology programs in the world and pursue a PhD at the University of California, Riverside (UCR). Her main research focused on completing a retrospective analysis of the glassy-winged sharpshooter biological control project in California by investigating the possibility of any non-target effects on the indigenous sharpshooters of the Golden State. This work involved both rigorous lab experiments and extensive field surveys. Additionally, since information regarding the native sharpshooters' behavior had been lacking, her study also necessitated research into some of the most fundamental life history traits, such as oviposition. This research led to the discovery of many native natural enemies of these sharpshooters. Overall, her non-target studies at UCR have contributed to the development of a more thorough testing strategy for examining possible non-target effects of insect natural enemies before introduction in future arthropod biological control projects.

10. Boyd, E.A. and M.S. Hoddle. 2006. Oviposition and flight activity of the blue-green sharpshooter on Southern California wild grape and its first reported egg parasitoids. Annals of Entomological Society of America. 99(6): 1154-1164