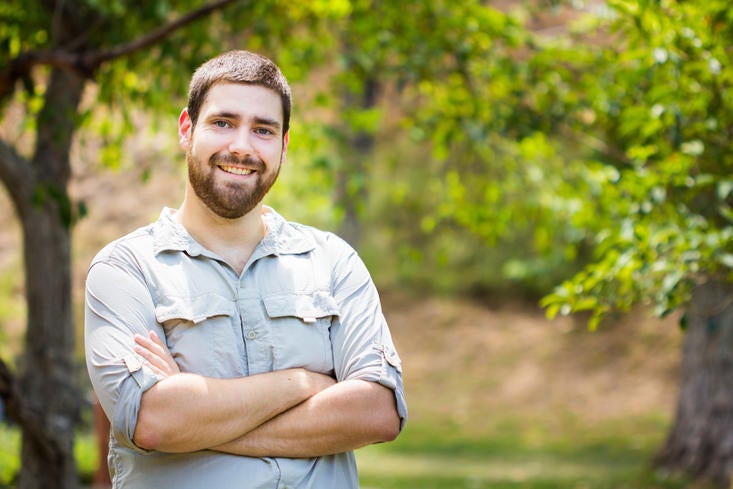 Austin Baker graduated from Oregon State University (OSU) with a B.S. in Zoology. He first gained an interest in insects while studying abroad at James Cook University in Cairns, Australia, where he made his first insect collection. Upon returning to OSU, he began his work in beetle systematics with Dr. David Maddison. He started his Ph.D. at the University of California, Riverside in 2013. The focus of his research has been revising the genus Orasema (Hymenoptera: Eucharitidae), a group of parasitoids that specialize on ants. The groups of ants that are targeted by these wasps include some of the most invasive genera: Pheidole (big headed ants), Solenopsis (fire ants), and Wasmannia (electric ants).

Orasema is a diverse genus, and distinguishing one species from another can be very difficult. Austin has spent the last few years trying to organize these species using a variety of approaches, including molecular sequencing, morphological studies, and behavioral observations. Next-generation DNA sequencing has enabled the use of massive quantities of genetic information to better understand evolutionary relationships. Austin will be applying these new techniques to investigate and delimit the species of Orasema. Gaining a good understanding of the taxonomy and host preferences of this group is a necessary first step before assessing their potential for biological control of invasive ant species. Austin is developing a pipeline of procedures to increase the efficiency of species discovery and delimitation that will be applicable across the superfamily Chalcidoidea.

Austin will present the current results of his research at the International Congress of Entomology in Orlando and attend a bioinformatics workshop at Florida State University with the funding provided by the Harry Scott Smith Biological Control Scholarship. This will allow him to learn from other’s research and learn the techniques that will be essential for processing massive quantities of genetic sequencing data.

Austin's scholarship is made possible in part by these 2016 donations